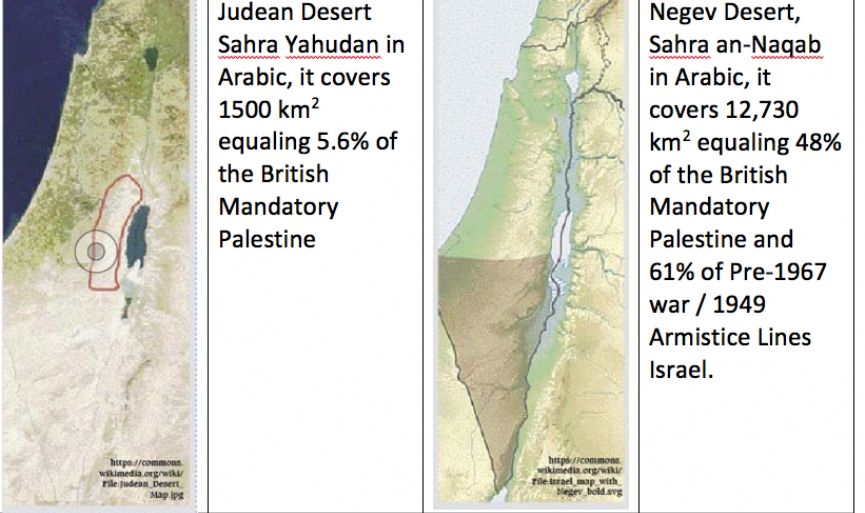 The Palestinians, who conduct a successful public diplomacy over the Internet, published maps of pre-state Israel under the British Mandate in 1946, claiming that only 5 % of the land belonged to the Jews.

The most notorious deceptive representation is the following one: But they on purpose, omit to publish THE SAME MAPS with both Jewish AND ARAB ownership!! The land purchasing distribution being as follows:

However, the fact that approximately 9 % of the land belonged to the Jews does not mean that the remaining 91 percent were in Arab ownership!

The correct percentages based on Pre-1967 war / 1949 Armistice lines borders are as follows:

Israeli Public State Land (Under the previous sovereignty of the “Crown”) 68.7 %!!

The plan allocated 56 % of the Mandate land to the Jewish State. However, about 60 % of it was the Negev Desert. Meaning 33 % of desert and 23 % of inhabitable/cultivable land of the Mandate. It allocated the Arab side 43 % of land and allotted 1 % for the Corpus Separatum of Jerusalem and its access roads. How to calculate the Arab private property during the British Mandatory Rule?

Apparently, the British were rather keen on Jewish purchases of land and neglected to conduct proper cadastral and ownership records for the Arab sector.  Indeed, …by 1948, the Mandatory Government of Palestine had completed the land settlement of only about five million metric dunams, which represent just 20 per cent of the 26 300 square kilometers of Palestine's total land area. This settled area is almost identical to the boundaries of the northern part of the State of Israel recognized by the United Nations in 1947. The fact that land settlement was not completed under the cadastral project, has remained ever since the focus of disputes over land ownership in areas of conflict between the Israeli Government, Jewish settlers and Palestinian Arabs.[1]

So, we could reach an approximate UNREALISTIC MAXIMAL PERCENTAGE as follows:

1-    The % of Unowned Public State Land in the Gaza Strip

We can therefore venture in estimating that individual Arab Owned Land could vary around ± 15 % of the British Mandate landmass. (See map Nr. 2 above.) Now, how about superimposing this map on the above Mandatory Palestine map showing Jewish and Arab land ownership and acknowledge whether the Palestinians’ private properties would be within reach of their owners?