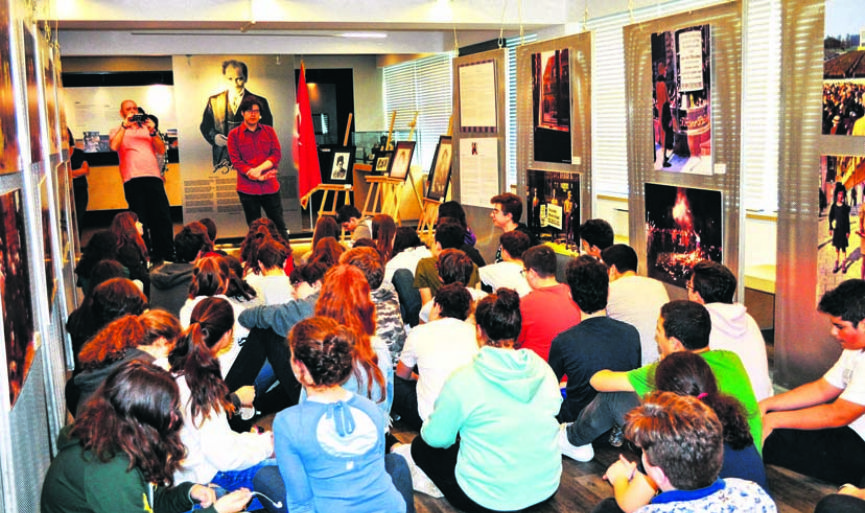 The “Visions of the Holocaust” exhibition was previously displayed in the Quincentennial Foundation Jewish Museum with the sponsorship of Consulate-general of Germany, on January 24th and received a huge interest. This time the photographs in the museum met the students of Ulus Private Jewish School in Istanbul. The exhibition which was opened with teachers and the high school students present, was quite impressive.

During the conversation that began in a question and answer manner, one student said, “We are used to seeing these photos.” At this remark Yusuf Tolga Ünker answered with the statement “Don’t get used to it, don’t let anyone get used to it, we shouldn’t get used to it…” and added, “For these sights not to be ever seen again, we should share the images that remind us the horrible events of the past and try our very best to ensure these never happen again. Especially you, young people have a lot of responsibilities in this mission.”

After the conversation with the students, the photo artist Yusuf Tolga Ünker remarked further about the exhibition saying “Holocaust subject, because it is not covered in the curriculum of Turkey’s education system, is not really well-known. Taking this into account, I wanted to create awareness and talk to young people about this subject. Hearing their ideas about an especially emotional subject like Holocaust, was an exceptional experience. My intention was to ensure that everyone, whether they knew Holocaust or not, feel for the people who felt this incredible pain. I also wanted for the young generation to be aware and sensitive about these horrible events of the past. One might think that these studies serve a religious community, but in fact the real aim is to let everyone, especially young people, understand this ‘matter of humanity’. I sincerely hope that this exhibition will achieve its aim and help new generations to have a better understanding of the Holocaust.”