Izmir Alsancak Şaar Aşamayim Synagogue which was rebuilt and turned into a ´Jewish Community Center´ has opened its doors with a ceremony on December 1st.
Silvyo OVADYA
SHARE ON TWITTER SHARE ON FACEBOOK
December 6, 2019 4544 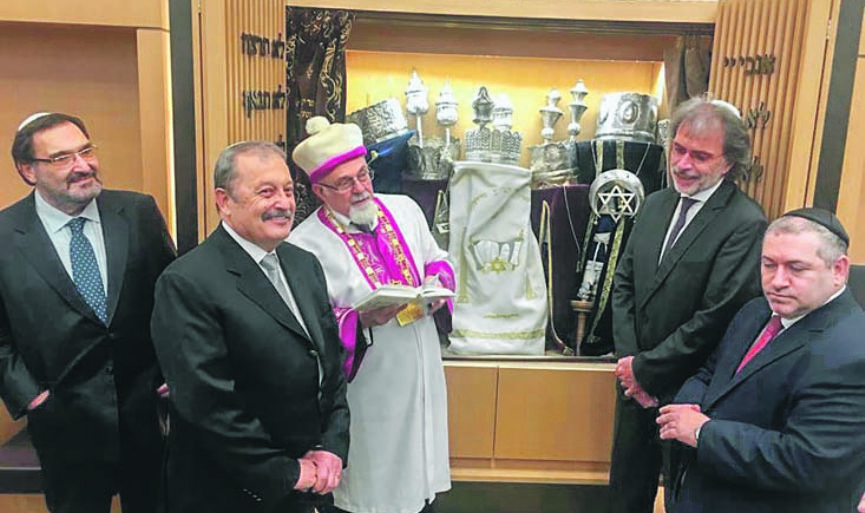 Alsancak Şaar Aşamayim Synagogue which was demolished and rebuilt again due to a critical weakness in its columns was reopened with a crowded ceremony. The new five-story building will also serve as a community center.

Şaar Aşamayim's Sefer Torah is replaced in its position in the synagogue that is transformed into a modern and useful building with the efforts of the architect Roni Ruso. Şaar Aşamayim Synagogue which was basically a house with a garden bought in 1960, was demolished a few years ago due to a critical weakness in its columns. Thanks to the possibility provided by the reconstruction terms, the synagogue building is rebuilt as a brand new five-story 'Jewish Community Center'. Though not fully completed, the center has begun to serve the Izmir Jewish community with full capacity for a few months now.

The synagogue and community center building, observed as a modern and useful structure, brought to life with the efforts of the architect Roni Ruso, was greatly appreciated by the visitors. In my personal opinion, Roni Ruso's name, who carried out all the architectural services pro bono, despite his being a capable and professional architect, should be placed on a plate in the synagogue. This important work can only be memorialized this way. Minchah prayer before and Arvit prayer after the opening ceremony was recited all together. During the ceremony, President Sami Azar thanked all the contributors and wished for the new synagogue to be propitious to the community. Chief Rabbi Haleva gifted the synagogue a modern silver Kiddush glass and Co-president Ibrahimzadeh gifted a silver 'Puntero - Reading Stick'. Taking this opportunity, I, as the president of the Quincentenial Foundation gifted President Sami Azar the 'Besamim (an object used after the Shabbat to take people back to daily life with its scent)' shaped like a bird, made out of clay by the ceramic artist Sara Aji. The ceremony ended with a Maftirim song (a Sephardic song) after the Arvit prayer. A wonderful cocktail was presented to the guests after the ceremony in the hall downstairs.

The photographs were taken by Berk ERALTAN

14 September
The Jewish New Year: Rosh Hashanah
Rosh Hashanah, the anniversary of the birth of the universe, is the day God created Adam and Eve.

4 August
Tu B´Av; Day of Love
Tu B´Av on which many happy incidents had happened throughout history and that is accepted as a very fortunate day for weddings, is celebrated as a ´Day of Love´ in our day. This year Tu B´Av will be celebrated starting on the eve of Tuesday, August 4th, and on Wednesday, August 5th.

28 July
The Saddest Day of the Jewish Calendar: Tisha B´Av
Tisha B´Av is the beginning point of the Teshuvah period when we get closer to God and ourselves and which we hope to complete on Yom Kippur.