Ersin Anjel, who started studying aeronautics and space in Turkey and continued his education in US is now working at NASA and developing security software for UAVs (Unmanned Aerial Vehicle). We talked with Ersin Anjel about his adventurous life that started in Nisantasi and about his work at NASA.
Dora NİYEGO
SHARE ON TWITTER SHARE ON FACEBOOK
June 2, 2020 1351 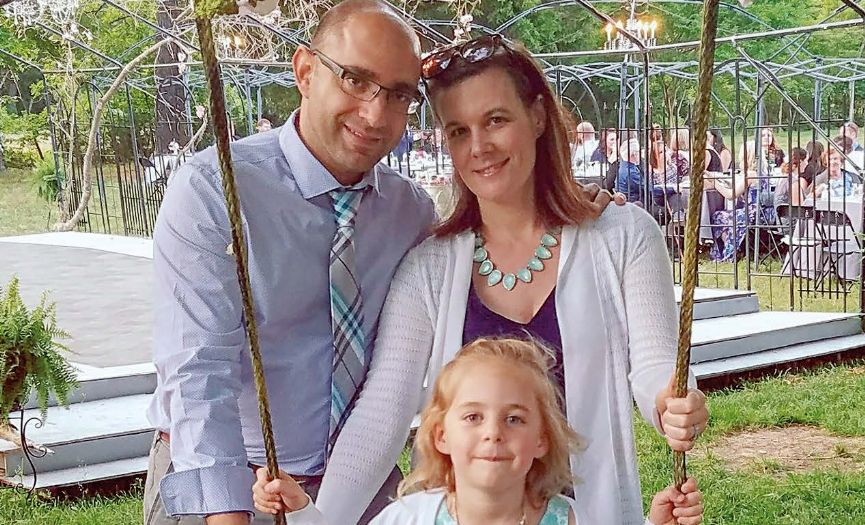 Ersin Anjel with his family

After reading the story of your life in Rifat Bali’s book “This is My New Homeland”, I wanted to do an interview with you. First, could you please introduce yourself for our readers?

I was born in Istanbul in 1982. Until I moved to US in 2005, I lived in Nisantasi with my twin sister Selin, my older sister Beril and my mother Etel. After I graduated from Saint Michel High School, I studied aeronautics and space engineering at Istanbul Technical University (ITU). After graduating from ITU in 2005, I went to Virgina Old Dominion University to get my master’s degree in Aerospace Engineering. In 2007, I started doing my doctorate in Engineering Management and Systems Engineering at the same university and I graduated in 2011. After graduation, I was recognized for my contributions in several projects my university conducted, and I was recruited by NASA Langley Research Center. In 2014, I was given tenure. Meanwhile in 2010, I married my girlfriend whom I met in US and four years later, our daughter Leia was born. After changing 10 different addresses in Virginia, we finally settled down in Yorktown.

You had said that your biggest dream was to work at NASA. You have a master’s degree in Aerospace Engineering. Were you successful in finding a financially secure job after you got your degree?

Yes, working at NASA had been a dream of mine since high school. But frankly I did not have high hopes. NASA has more than 10 centers and various labs in America. When I was applying to colleges, I especially checked whether those colleges were collaborating with NASA on various projects. Also, I focused on colleges where NASA engineers working on major wind tunnels were part-time lecturers. Old Dominion is a university which is not only in close proximity to NASA Langley Research Center, but also a university that employs both active and retired NASA executives as lecturers. That is why I had my master’s degree in that university. I wanted to immediately jumpstart my career. But it is difficult for foreign students with no work visa to find a job in aerospace and defense industry. After several interviews with many companies, I realized that one of the preliminary conditions to work in my field was having a US citizenship and the second was passing the security clearance. So, I decided to expand my field of study and get a doctorate degree on engineering management. While I was studying to get my doctorate, I worked as a research assistant. This way, I was not only able to gain experience, but also my financial independence. Afterwards, by getting married with my girlfriend, I first obtained a work visa and then US citizenship. Eventually, the NASA engineer who was a member of my doctorate committee, liked my projects and offered me a contracted job at NASA. At the age of 29, I finally grew up and started my real job.

You have been working at NASA for many years now. Could you tell us about some of your experiences on the job?

Before starting to work at NASA, while I was still studying to get my master’s degree, I conducted two “Suborbital Rocket Experiments” at NASA’s Wallops Flight Facility. I was the leader of several teams responsible for these experiments. In the first experiment, our objective to conduct cancer research in a gravity-free environment. The objective of the second experiment was to achieve wireless communication in the same gravity-free environment. These rockets were from the Cold War. They were the engines of intercontinental ballistic missiles. They were over 10 m high with a weight of over 1,500 kg and their range was 150 km. Then as part of my doctorate research, I collaborated with NASA for 18 months on a project which later constituted my doctoral dissertation. After graduation, I started working at NASA Langley Research Center. In the first three years, I worked on public transportation and flight safety. I modeled different variations of potential accidents and helped NASA determine a short and medium-term investment portfolio. Then, in 2014, I was given tenure at NASA and started working on security systems for unmanned aerial vehicles. For the last five years, I am leading two projects that develop security software for both UAV’s and air taxi/urban air mobility vehicles. Our objective is to fly unmanned aerial cars in the city and land them on designated pads placed vertically on rooftops to reduce city traffic. Even though this may sound like a scene from the famous animated short series The Jetsons, there are still major issues to be solved before we get closer to having a life like in the Jetsons.