In Osmanbey, Istanbul, on a street opposite of Pangaltı, a mob with one-of-a-kind sticks, approach some buildings which they probably had determined beforehand and plan to enter the houses of Greek Orthodox citizens who had been living in Turkey for centuries.
İvo MOLİNAS
SHARE ON TWITTER SHARE ON FACEBOOK
Listen September 10, 2020 1516 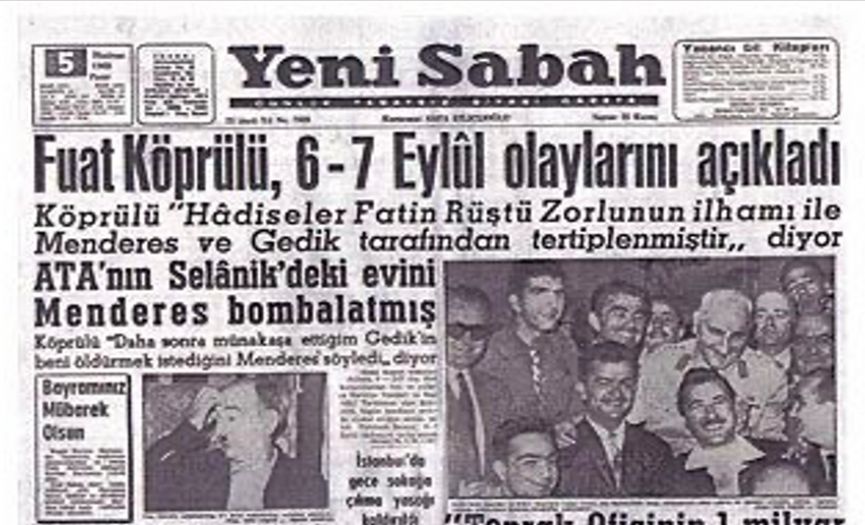 In Osmanbey, Istanbul, on a street opposite of Pangaltı, a mob with one-of-a-kind sticks, approach some buildings which they probably had determined beforehand and plan to enter the houses of Greek Orthodox citizens who had been living in Turkey for centuries.

The intention was, with some people’s guidance and provocation -of whom still unknown-, to revive the oldest, most primitive instinct of mankind, looting, that despite all the mental and social development, hasn’t been able to be removed from its nature.

When the angry mob, tries to enter the first building of the street, the building attendant who is from the Black Sea region, with a Turkish flag in his hand, says “Everyone here is Turkish, go away” and the looters move on to the next building. However, Greeks were living on the three floors of that building and thanks to a courageous Turkish Muslim, who had not lost his humanity, they were relieved of their house being plundered and other troublesome incidents.

During about the same time, a mob similar to the one in Osmanbey, approaches the Büyükada pier. The purpose is the same. They would enter the Greeks’ houses, and not even caring about what they were avenging, would brutally victimize hundreds of Greeks and other non-Muslims whom they assumed as Greek. A horrible panic starts in Büyükada; some young Jewish women were taken to the far ends of the island by Muslim families because of the fear of rape, thus escaping a terrible trauma that would probably hunt them for the rest of their lives.

This irrational and agitated crowd of people who came to Büyükada, also raided the house of the legendary player of Turkish football history, Lefter. Lefter who spoke following the incidents, would say, “15 days ago I was on people’s shoulders when I scored a goal, but on that day, I came across rocks and paint cans. What upset me the most was that the children who I gave pocket money, were stoning my house. My daughters were small, they tried to kill them.”

On the morning of September 7, a boat carrying people holding the same kind of sticks, docks at the Çanakkale coast. They intended to pass with smaller boats from there to Tenedos (Bozcaada) where Greeks lived. However, the soldiers do not let those people go ashore and maybe thus a few Jews living in Çanakkale and Greeks in Tenedos had been saved from the likes of the disastrous incidents in Istanbul.

Everything would start with the news that one day ago a bomb had been put in Atatürk’s house in Thessaloniki. A bomb had really exploded in the garden of the house but only the glasses had been broken. Nevertheless, ‘Ekspres’, an unimportant newspaper of Istanbul with only 30,000 editions, would publish 290,000 newspapers on September 6 with an express print and convey the incident to the people of Istanbul with a provocative verbalism. An interesting coincidence would be that on September 5th, crowded groups of people in some cities of Anadolu would get on buses and head to Istanbul. When asked why they were going, some would answer ‘to collect trophy’.

And in Istanbul in the afternoon hours, first some university students and then members of ‘Cyprus is Turkish Association’ would convene to protest especially in districts where Greeks’ businesses and homes are, later unidentified people arriving at the city on buses would join them holding sticks and other destructive tools in their hands, and all hell would break loose.

Incidents that had lasted until morning would create the darkest stories full of violence, pillage, looting, setting the buildings on fire, rape and murder, in the city’s history towards the minorities in Istanbul.

The outcome would be very grave on the morning of September 7. As a result of the attacks in the districts where minorities had been, 15 people, 14 of them Greek Orthodox and 1 Armenian, would be killed, 300 people injured, and 400 women would be raped. More than 4,200 houses, 1000 businesses would be looted, 73 church and 1 synagogue would be burnt down.

In Izmir, similar attacks would also be made to the Greek Consulate and some Greek houses.

The Adnan Menderes government of the period in awe to see everything got out of control, as it had seemed, would declare martial law at midnight September 6th, soldiers would march the streets and the looters would start to run away.

The government trying to get out of responsibility, would think of blaming the ‘communists’ for the incidents and arrest many intellectuals including Aziz Nesin, Kemal Tahir, and Hasan Izzettin Dinamo. However, the perpetrators were far away. Besides, in a few months, all the intellectuals would be found innocent and released.

During the Parliament talks on September 12, Ismet Inönü, the head of CHP [the opposing political party] of the period, would blame the Menderes government, would remark that the incidents had to be dealt with and say “However bitter and shameful the truth shall be, to show them as they are, is the only way to come clean to our great nation.”

Yet this dark page of the history would not be dealt with, the issue would try to be covered up.

In the 1960 Yassıada trials, Adnan Menderes, Fatin Rüştü Zorlu serving as vice president, and the Governor of Izmir of the period would be found responsible and guilty of this dark page, however the person who supposedly threw the bomb in Thessaloniki, and who had been found guilty and sentenced by the Greek authorities in absentia, would, for some reason, be acquitted...

Morning of September 7, on the edge of the Beyoğlu street resembling Kristallnacht, according to the rumor the Greek citizens are said to have said ‘Bora ine tha perasi’* to each other.

However, once the hearts had been broken, they could not be fixed.

After that fateful day, Greek Orthodox citizens in Turkey would migrate in masses in time, from the Dersaadet [door of happiness] and Izmir where they had been living in and loving for centuries.

Nowadays, they almost strive to exist with 2,000 population.

After all, in time, there won’t even be anyone left to be caught in the ‘storm’.

And a dark page, will probably be left to sink into oblivion, without finding its real perpetrator...

Note: The short stories told about Osmanbey, Büyükada (except Lefter’s story), and Çanakkale, are what are told to me from their memories by witnesses of those days who are still alive today.