´Ladino´s Renaissance´: For This Dying Jewish Language, COVID Has Been an Unlikely Lifesaver

Thanks to lockdowns and online learning, the world of Ladino is now flourishing, leading many to reassess whether they´d been too eager over the years to believe rumors of the language´s imminent extinction.
Kenan CRUZ
SHARE ON TWITTER SHARE ON FACEBOOK
January 13, 2021 780 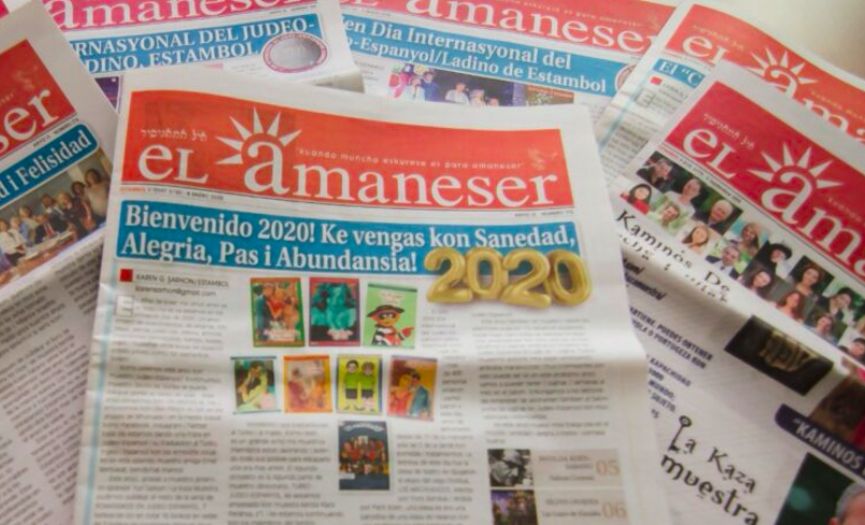 Copies of Şalom´s Al Amaneser, until a few months ago the only regularly published Ladino language newspaper in the world Credit: Kenan Cruz Cilli

Once proclaimed a language on the verge of extinction, today Ladino is undergoing a remarkable and intriguing resurgence. And its most recent spike in global interest and usage has come from an unpromising source: COVID-19.

One unexpected consequence of the ongoing pandemic has been a big increase in activities in Ladino: online. From the organization of multiple language courses, to weekly international Zoom discussions and a new spike in publishing, the world of Ladino is now flourishing, leading many to reassess their previous, pessimistic assumptions about the vitality and dynamism of the language.

And it’s not just about the numbers of Ladino speakers and learners: the lockdowns and the shift online has helped bring Ladino-speaking communities separated by thousands of miles closer together, giving the language a new lease on life.

One need only look at the contents of Istanbul-based "El Amaneser," the monthly newspaper published since 2005 entirely in the Ladino language to get a sense of the steep rise in Ladino-related activities across the globe.

The paper decided, in response to the burgeoning demand, to dedicate several pages each month to contributions by students of Ladino, Jewish and non-Jewish alike, who have been learning the language in online courses. These students, who hail from a wide array of backgrounds and age groups, have helped shatter the notion that speaking and writing in Ladino is an interest exclusive to older generations.

Up until the pandemic, estimates of the number of speakers of Ladino, also known as Judeo-Spanish, Judezmo, Spanyolit and Djidió (in Bosnia and Herzegovina), ranged wildly between 60,000 to 400,000 people. The world language database Ethnologue estimates that there are around 130,000 speakers worldwide. It has a minority language status in Israel, France, Bosnia-Herzegovina and Turkey. UNESCO considers it one of the world’s 6,000 languages at risk of extinction. 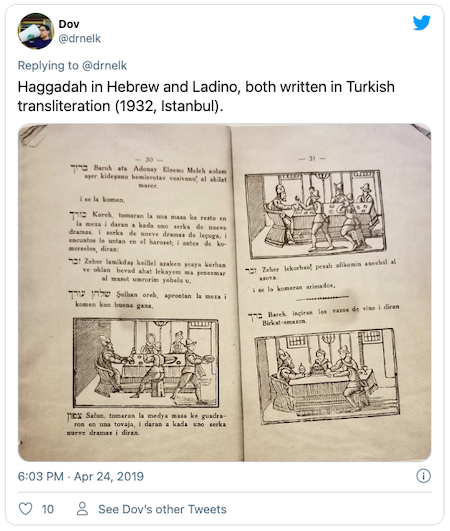 Most speakers are descendants of Sephardic Jews who settled in the Ottoman empire in the aftermath of mass expulsions from Spain and Portugal in the late 15th century. For hundreds of years, Ladino flourished in the Ottoman port cities of Istanbul, Salonica, and Smyrna, picking up loan words from other languages spoken in the empire such as Greek and Turkish. In 1939, a full five percent of Istanbul’s entire population were Ladino-speakers: 35,000 people.

Nowadays, Ladino speakers are dispersed across the globe, with significant concentrations in countries such as Israel and Turkey, as well as various cities in North and South America with large Sephardic populations.

El Amaneser’s editor, and coordinator of the Sephardic Research Centre in Istanbul, Karen Şarhon, is both enthusiastic and optimistic about what she regards as Ladino’s "renaissance." 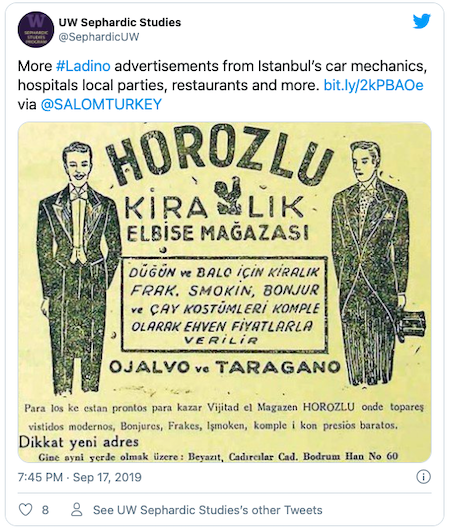 This year, as teaching that had long depended on face-to-face instruction shifted online, students faced a new geographical and intellectual fluidity: no matter where they were, they could participate in Ladino courses based in the United States, Turkey and Argentina. Many of these students, some as young as 13, have now started to actively write in the language. "This was like a miracle," comments Şarhon. "Suddenly I received an avalanche of articles!"

The fresh cohort of student writers is far from being the only novelty in the world of Ladino since the start of the pandemic. Up until a few months ago, El Amaneser was the only Ladino language newspaper left anywhere, being the sole representative of a long tradition of Ladino publishing and journalism in the Sephardic world, from Salonica to Izmir, Bosnia to Bulgaria to the United States.

In recent months, however, the Jerusalem-based Aki Yerushalayim periodical has been revived following a hiatus of several years. This is another clear indicator of the worldwide efforts being made to both preserve and invigorate this unique language and culture.

Another novelty in the era of Zoom has been the organization of weekly meetings held entirely in Ladino. The list of time zones in the weekly promotional posters for these meetings, attests to the scope and strength of the transnational Ladino speaking community. Every Sunday, participants from all over the Americas, to Spain, France, Turkey and Israel gather to hear interesting discussions relevant to contemporary Sephardic identity. 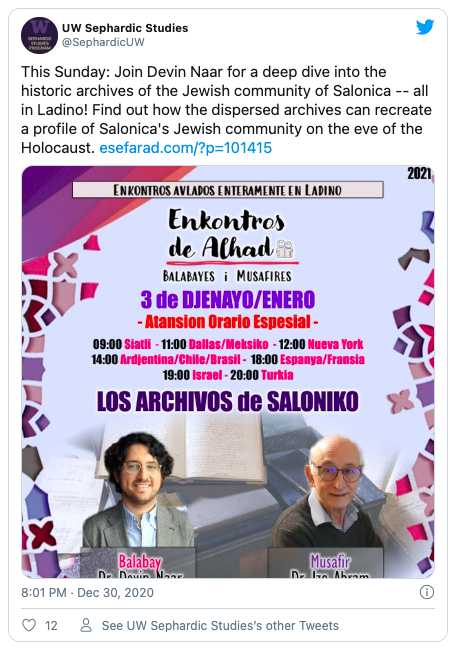 Though it’s wise to remain cautious about the trajectory of Ladino in the coming decades, it is clear that the online domain has opened up a space for Ladino to grow, and for previously attenuated connections between Sephardic communities to recover and even create new connections and linguistic and cultural networks.

Many are optimistic that the longer term impact of this Ladino renaissance means Ladino will be saved from extinction, and stay alive and kicking into the 22nd century.

"When I think about Tracy Harris' book in the 1990s [her book, "Death of a Language: The History of Judeo-Spanish" was adamant that Ladino was in an irrecoverable and terminal decline] claiming that Ladino was a ‘dead’ language, I can only say, "Yeah, right!" with a smirk," concludes Şarhon, with quiet pleasure.

Kenan Cruz Çilli is a graduate student of Modern Middle Eastern Studies at the University of Oxford and a regular contributor to El Amaneser and Şalom. His interests include cultural heritage and minority identity in Turkey. Twitter: @kenancruz