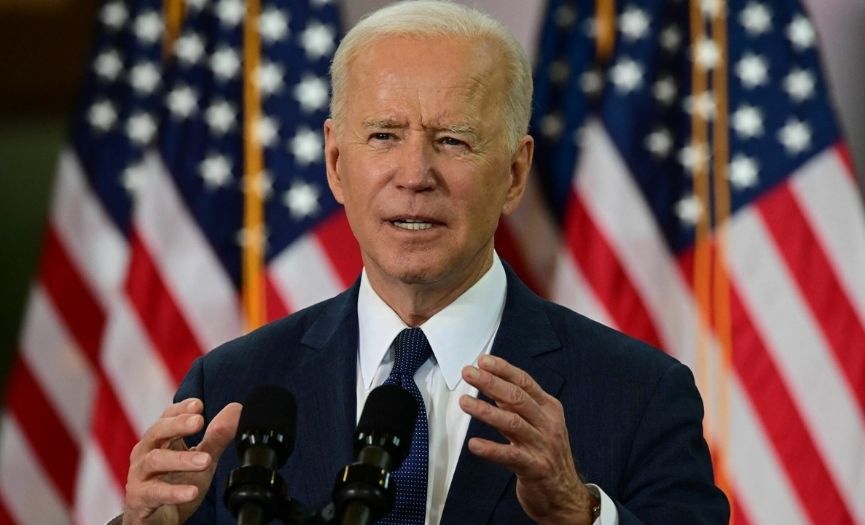 Biden in his statement said, "Each year on this day, we remember the lives of all those who died in the Ottoman-era Armenian genocide and recommit ourselves to preventing such an atrocity from ever again occurring. Beginning on April 24, 1915, with the arrest of Armenian intellectuals and community leaders in Constantinople [Istanbul] by Ottoman authorities, one and a half million Armenians were deported, massacred, or marched to their deaths in a campaign of extermination."

Biden using the words 'Meds Yeghern' meaning 'Great Disaster' in Armenian in his statement, said, "We remain ever-vigilant against the corrosive influence of hate in all its forms."

Also, Istanbul's being mentioned as 'Constantinople' in the statement has been noteworthy.

Biden expressing that many people surviving from 1915 incidents had built new homes and new lives around the world, including in the United States, remarked that over the decades, Armenian immigrants had enriched the United States in countless ways.

Biden, indicating that the ancestors of Armenians had brought their stories to American lands, said, "We honor their story. We see that pain. We affirm the history. We do this not to cast blame but to ensure that what happened is never repeated."

The statement made by the Turkish Ministry of Foreign Affairs said:

"It is clear that the said statement does not have a scholarly and legal basis, nor is it supported by any evidence. With regards to the events of 1915, none of the conditions required for the use of the term “genocide” that is strictly defined in international law are met.

The nature of the events of 1915 does not change according to the current political motives of the politicians or domestic political considerations. Such an attitude serves only a vulgar distortion of history.

The European Court of Human Rights has clearly confirmed the controversial nature of the events of 1915. Moreover, in 2005 Turkey proposed to the Armenian side to establish a Joint History Commission in order to reach a just memory in the light of historical facts of that period. Although Armenia has never responded to this proposal, it is still on the table. In this respect, the statement made by the President of the US, who is neither legally nor morally authorized to judge historical matters, has no value.

This statement of the US, which distorts the historical facts, will never be accepted in the conscience of the Turkish people and will open a deep wound that undermines our mutual trust and friendship.

We call on the US President to correct this grave mistake, which serves no purpose other than to satisfy certain political circles and to support the efforts aiming to establish a practice of peaceful coexistence in the region, especially among the Turkish and Armenian nations, instead of serving the agenda of those circles that try to foment enmity from history."

Turkish Minister of Foreign Affairs, Mevlüt Çavuşoğlu, in his statement regarding the issue, said, "We have nothing to learn from anybody on our own past. Political opportunism is the greatest betrayal to peace and justice. We entirely reject this statement based solely on populism."

Turkish Jewish Community in their statement on Twitter regarding the issue said:

"On this painful day that the Ottoman-era Armenians who had lost their lives as a result of the great disaster that happened during the tragic conditions of World War I are commemorated, we support Patriarch Sahak Maşalyan's statement saying that agonies should not be used for political purposes, and we agree with our Respected President's idea of a 'Joint History Commission'." 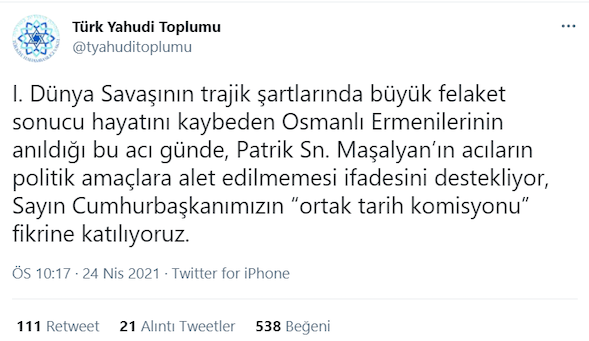