European Day of Jewish Culture, an annual cultural event organized in 35 countries throughout Europe including Turkey, was held this year on October 14th at Neve Salom Synagogue and the Quincentennial Foundation Museum of Turkish Jews with a massive turnout. The events theme this year was storytelling. The culture and traditions of Jews living in Turkey were told through tales and stories.
SHARE ON TWITTER SHARE ON FACEBOOK
October 22, 2018 2664 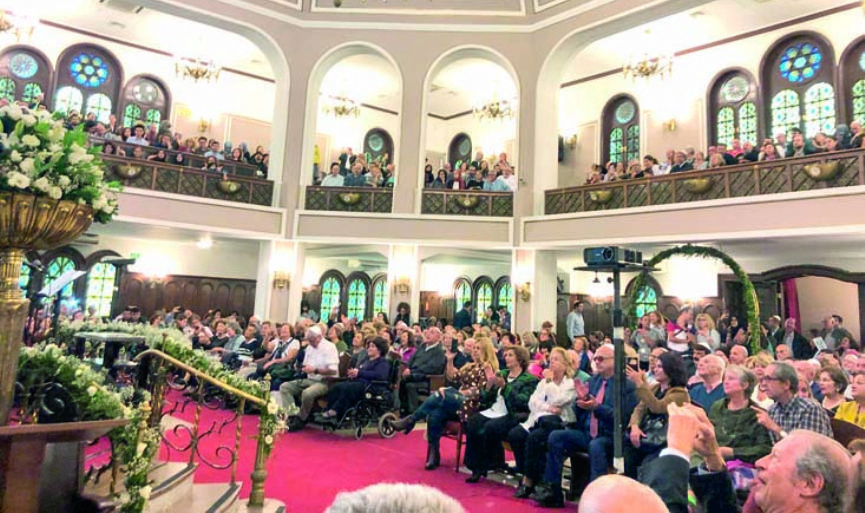 The culture and traditions of Turkish Jewish community, the fading Judeo-Espanyol (Ladino) language spoken by Sephardic Jews and the Sephardic cuisine were introduced to visitors through concerts, documentaries, chat sessions, exhibitions and workshops at European Day of Jewish Culture. The goal of the event was to reveal and share the cultural and historical heritage of the Jews, their traditional music, art and customs with the people of this country.

The whole event was open to public and its diverse content took the visitors on a journey to the lifestyle of Turkish Jews.

Throughout the day, there were three different exhibitions at three different venues. ‘Anne Frank A History’ exhibition, Izzet Keribar’s photo exhibition displaying Jewish life, and ‘Centropa’, an oral history project that depicts a certain period were swarmed by visitors. The Quincentennial Foundation Museum of Turkish Jews was also visited by a huge number of visitors.

At the event, Suzet Herman and Seli Gaon talked about the history and etymology of Judeo-Espanyol language. Judeo Espanyol is a language that was spoken by the Jews who migrated from Spain and is still being spoken, although less and less everyday by Turkish Jews.

At this year’s ‘Come, Let’s Meet’ event, the young hosts answered all of the questions coming from the guests and gave information about Jewish traditions and customs. The event aiming to cast away any prejudice, provided an open platform where people could engage in one-to one dialogue.

Acclaimed author and historian Naim Guleryuz introduced his new book ‘Jewish Settlements in Thrace and Anatolia Throughout History’ and in his speech he mentioned various historic events.

At the ‘Let’s Cook Together: Samples from Sephardic Cuisine’ workshop, Gilda Kohen gave information about historical and gastronomical aspects of Sephardic cuisine while she together with the visitors cooked delicious Sephardic food.

At ‘I’m Telling a Tale to Myself’ chat session, Moris Levi talked about Jewish stories, tales, aphorisms and his insights about Judaism.

At ‘Old Istanbul’ chat session Yusuf Altintas talked about his childhood years in Haskoy where he was born and raised as a kid and the relations between neighbors, back then.

At ‘Bridges of Tales’ workshop, author Tamara Pur, opened the magical gate to reality from dreams with tales and music. Estella Kucukbarokas, who describes herself as a storyteller, in her workshop ‘Jewish Tales from These Lands’ read passages from tales and stories passed on from one generation to the next, tales and stories that begin with the story of Sephardic Jews coming to Ottoman Empire.

Soloists Cenk Rofe and Ediz Bahar accompanied by Cefi Sağlamlar and Izzet Bana’s Estreyikas d’Estambol Choir gave a concert at Neve Salom Synagogue. The voices of Rofe and Bahar mesmerized the audience at the concert ‘A Journey from Pop Music to Musicals and Classics ‘.

Throughout the day there were three documentary screenings. Deniz Alphan’s ‘A Fading Language, a Fading Cuisine’ documentary depicted the danger of extinction Judeo Espanyol language and Sephardic cuisine face, today.

The all-day event with a record number of visitors this year – over two thousand – ended with Semes Karmiel’s dance performance.

We hope that this annual event which is being organized with the goals to bring people from all communities living in this country for over 500 years together, become an enabler of dialogue and enrich people’s life with new information, will continue to be organized for many years to come with more and more visitors each year.