"Holocaust Concerts are Our Debt to the Victims and All Humanity"

For four years, during the Ankara University´s Holocaust Remembrance Day Assemblies, the events most remembered have been the concerts. Prof. Dr. Hasan Yener from Ankara University State Conservatory and his wife Prof. Dr. Yeşim Alkaya Yener from Hacettepe University Ankara State Conservatory are the architects of these wonderful concerts that fill the hearts and minds...
Virna BANASTEY
SHARE ON TWITTER SHARE ON FACEBOOK
February 19, 2020 1752 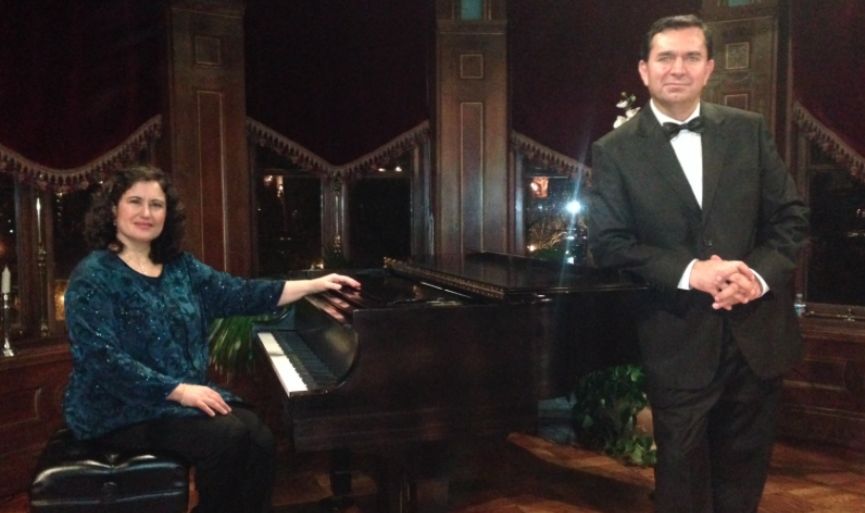 We talked with this musician couple to learn more about the preparation process of these concerts.

Prof. Dr. Hasan Yener; first of all, you have a very impressive background on singing and opera. Could you please tell us a little more about yourself?

I graduated from Izmir State Conservatory Opera Department in 1989. Following my graduation, I got my Masters Degree in 'Singing and Opera' in the USA, in Cleveland Institut of Music founded by the famous Jewish composer Ernest Bloch. There I worked with famous teachers and stage managers. I completed my Doctorate Degree at Indiana University School of Music.

During the 13 years I spent in America, I worked with many famous artists, producers, and directors, performed concerts and took part in operas.

When we came back to Turkey with my wife, I started teaching 'singing' at Ankara University State Conservatory. As a performer academician, I continue performing concerts in Turkey and abroad.

Prof. Dr. Yeşim Alkaya Yener; likewise you have many important works and experiences in and out of Turkey. Could you please tell us a little about yourself?

I graduated from Ankara State Conservatory's Department of Piano with the status of "Highly Talented Children". After graduation, I went to the USA for further education. I was accepted in the Piano Department of the world-famous Eastman School of Music and started to work with Prof. Rebecca Penneys. I graduated there as the youngest person to get a Masters Degree. Later I got accepted in Russia as an exchange student for advanced piano education and studied at Gnesinih Music Institute. There I worked with Prof. Davidovich Gutman. From there, I went to Santa Cecilia Music Institute in Italy on a scholarship.

Later, I went back to America and got accepted to the world-famous Cleveland Institute of Music on a full scholarship and got to work with famous teachers like Prof. Vivian Weilerstein, Donald Weilerstein, and the American composer Donald Erb. During my education in Cleveland, I performed concerts in many states of America, won first prize and many other awards in international piano competitions.

After I completed my Doctorate education we moved to Chicago with my husband and there I worked with Daniel Barenboim, the world-famous director of the Chicago Symphony Orchestra at the time. I also went on performing concerts, while I was the head of the piano department. I performed in many concerts during the 17 years I stayed in America.

I believe that the world-famous Jewish musicians I worked with throughout my education, like Prof. Davidovich Gutman, Prof. Penneys, Prof. Vivian Weilerstein and Daniel Barenboim, made me understand and appreciate the Jewish music, the feeling of it. For example works of the famous Jewish composer Ernest Bloch who was the founding director of the Cleveland Institute of Music, are pieces I perform fondly and frequently. For how many years have you been preparing the Holocaust Remembrance Day concerts in Ankara? Before that how was your awareness of the issue?

We have been preparing the Holocaust Remembrance Day concerts for four years. This year on January 31st we performed the fourth one. Before that, surely we had an awareness of the Holocaust. However, as performer academicians, to be involved in it with our art, and our findings of the researches we made on the relationship between music and the Holocaust, opened doors to a different world.

The songs we hadn't known before and discovered when we were preparing for this event, those songs coming right out of the Holocaust, from the death camps; those songs of the composers, poets whose hopes sang in their songs that were never fulfilled, whose lives had been perished with brutal tragedies, who were victims of the Holocaust... Taking us from today to those days, to the camps through time travel... Their stories full of pain and suffering they told us through their songs, made us better understand the horror Holocaust caused people materially and spiritually. We really embraced the issue and made it our duty as artists, to transfer what they lived through, their emotions, their pains, to the people of our day, with their words and melodies. Wasn't this the reason why they left their songs and poems to us as their legacies.

As far as I understand preparing for the concert calls for a detailed and in-depth study. Could you please share what you did during the process?

Four years ago, when we were first asked to make the first Holocaust Victims Remembrance Day concert, we being academicians started with exploring the relationship between the Holocaust and music.

Our intention, if we could, was to find the songs coming out of the Holocaust, songs with Holocaust themes. Because the mission we had been entrusted with was a very important one and doing it adequately was our duty to humanity. Along this quest, we discovered many songs; even songs of the real stories of Holocaust victims...

One, for example, was 'Shifreles Portret'. This belonged to the Jewish poet and composer Mordechai Gebirtig from Krakow, who is accepted as one of the most famous poets of European Jews. Shifre in the song is his daughter whom he wishes desperately to meet again one day, this hope making him hold on to life; whereas they both are murdered by the Nazis and never have the chance to see each other again...

All our other songs were the pieces that evolved out of the Holocaust. The marches sang in the camps, songs of the victims, etc.

Every year we performed concerts with new songs. Because these songs were mostly in Yiddish, we also studied our Yiddish pronunciations meticulously. Another important issue was to perform the pieces appropriate to their traditional styles.

We now have a considerable Holocaust music repertoire which we are performing with pleasure, expecting and taking nothing in return, as our debt to those innocent Holocaust victims and all humanity, and we will continue to do so. They might be dead but the poems and melodies they wrote reached today and thanks to art will reach tomorrows. Their poems and music will go on transferring these experiences to the new generations so that inconceivable brutalities like these won't ever be lived again. In this sense, if we can contribute to this mission, even in a small way, this will be enough to make us happy. We respectfully commemorate all the Holocaust victims, whatever their religion, nationality, or race shall be, and pray their souls may rest peacefully.

We will never forget and we say "Never again!"