Edirne Enthusiast Aydemir Ay: Neither Edirne, Nor You Can Forget One Another

Aydemir Ay´s new book The Cuisine of Edirne Jews is getting ready to hit the shelves. We listened to Ays passion for Edirne in his words.
Dora NİYEGO
SHARE ON TWITTER SHARE ON FACEBOOK
April 22, 2020 2757 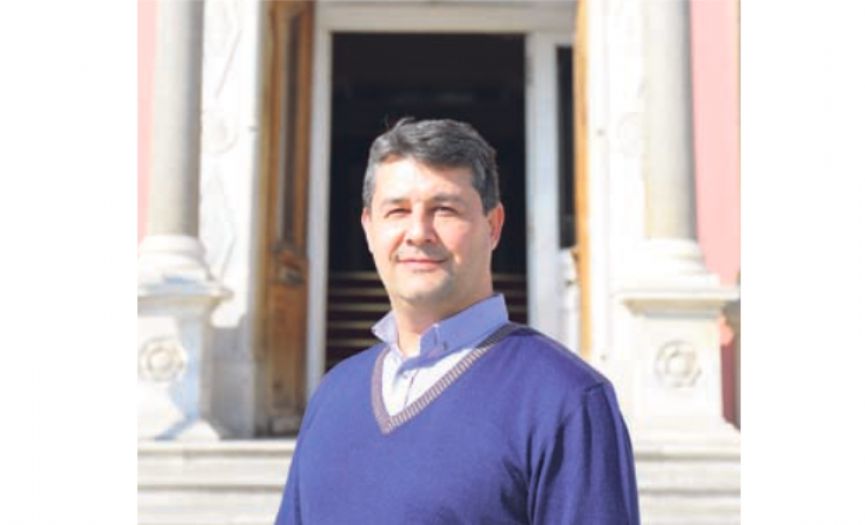 Where did the idea to write a book about the cuisine of Edirne Jews come from?

In fact, even though this question sounds simple, it is actually a complicated one. I was raised in Edirne, Kaleici district. Edirne was one of the richest cities in Turkey in terms of Jewish population. I spent my childhood right next to the synagogue. In all the photos of my parents, you can see their Jewish friends. In all the anecdotes they would tell us at the dinner table, the names of their Jewish friends would be mentioned. My big brother Ozdemir and I have probably listened to thousands of anecdotes like that.

My grandmother would tell us about her Jewish neighbors, Ishak Ovadya, the owner of the dairy farm where my grandfather was a partner and our landlady Madame Zizi. My grandmother used to cook Madam Zizi’s borekitas and frojalda recipes. Especially on April 23rd Edirne High School Reunions, my father’s pharmacy would be filled with his Jewish friends and I would listen to their numerous stories. I would feel as if I was actually living in those days.

Where did the idea of writing this book come, you ask? I too witnessed these flavors, these delights, these memories, these true-life experiences, these friendships. Neither Edirne nor you can forget one another. The book came from this idea. The borekitas my grandmother baked, the stories and anecdotes my father told built the foundation of this book.

While exploring the cuisine of Edirne Jews, it gave me such excitement and pleasure to come across certain dishes that people who live in other cities have never heard of. And it is this excitement that drove me into digging deeper. For me it was like finding a hidden treasure, when I discovered that the vegetable dish  ‘Kaskarikas’ is called ‘encinaras’ by some families living in Edirne and when I found out that there is a different type of ‘Boyoz’ baked in a different way by Edirne Jews.  These were some of the factors that made me research deeper.

Everything was ready, but there was one thing that was missing. With the valuable contributions of Dr. Yilmaz Secim, faculty member at Necmettin Erbakan University, Tourism Faculty, Gastronomy and Culinary Arts Department who helped us at every stage and co-wrote the book with me, our book finally came to life. The book ‘The Cuisine of Edirne Jews’ is almost the only resource that academically examines the cuisine and culture of Edirne Jews.

There is only one Jewish family left in Edirne. In order to write this book, you had to be in close contact with many Jews. How did this work?

In cooperation with Hurriyet Daily Newspaper and Association of Turkish Travel Agencies (TURSAB), we put together a program called “Discover Edirne” to promote the city of Edirne. In the three-day program we were also expected to promote Edirne’s palace cuisine, Edirne cuisine, Balkan and Rumelian cuisine. With the encouragement of Edirne Mayor Recep Gurkan, we added the cuisine of Edirne Jews to the list of cuisines to the program. I met journalist Gila Benmayor at the “Discover Edirne” program. She talked about her mother Marie Benmayor who was from Edirne. I told this to Recep Gurkan. We would be able to interview Mrs. Marie and build the core foundation of our book “The Cuisine of Edirne Jews”. After a three-hour interview at Mrs. Marie’s house and a delicious tasting session, our excitement doubled. With the support of our Mayor, we were able to complete our book.

Then, we sat down with my father and made a list. I phoned or contacted online everyone who were on our list and requested interviews. They were so helpful… Each interview was very pleasant.

Avram Avigdor, Efrahim S. Adato, Hazmonay Derazon, Ida Bohor Avigdor, Lea Halfon, Marie Benmayor, Moiz Bayer, Nesim Kanetti, Roza Avigdor, Soli Avigdor are the people who gave the recipes in our book ‘The Cuisine of Edirne Jews’. Of course, my father Ibrahim Ay’s contribution was also significant. Thanks to my father, we were easily able reach out to our friends from Edirne.

If we have your support as well, we can also establish Edirne Jewish Museum and a restaurant inside it where visitors will get the chance to taste the delicious dishes mentioned in this book.

Are you planning to have your book translated into Judeo-Espanyol?

Absolutely. Thankfully, Silvyo Ovadya, whom I value very much, is helping me with regards to the translation process. He is putting so much effort in preserving this culture and language. It is important for this book which is originally written in Turkish to be translated to English and Judeo-Espanyol since it may act as a tool to allow tourists and visitors coming to Edirne to get acquainted with this culture. It is also important for Judeo Espanyol language which has been spoken in Edirne for more than 500 years to be not forgotten.

Do you believe that the renovation of the synagogue will have a positive impact on the number of Jewish tourists visiting Edirne? How will it contribute?

Edirne Grand Synagogue is the third biggest synagogue in Europe and the second which is still operating. It is among the biggest synagogues. Reopening the synagogue for worship allows weddings, concerts, exhibitions and other cultural events to take place. This will bring the spectacular culture, the extraordinary wealth, and reunion of civilizations back to life. Maybe millions of tourists will not visit Edirne to see the synagogue, but millions of tourists and visitors coming to Edirne will visit here. They will go see a concert, visit an exhibition or watch the concert on TV.

Jews of Edirne are visiting Edirne to see Kaleici, the Jewish Cemetery, Edirne High School, etc. They visit the city for the sake of old friendships and for the love of Edirne. If you are originally from Edirne, you can never totally detach from Edirne.

From what I know, you are very invested in Edirne Jews. In fact, you had said that you will be visiting Israel, soon. Can you tell us about that?

The memories and culture of our dear friends who have been and (some) are still living in Edirne for more than 500 years must be kept alive. The Jews of Edirne is a subject which has not been studied very much. My book, “The Cuisine of Edirne Jews” is the first installment of my new series ‘Edirne City Cultural Studies’. The next book in the series will be titled, “Memories of Edirne Jews”. I am still working on it. After I interview our Jewish friends from Edirne who now live in Israel, I will also put together memoirs of our 40 Jewish friends who used to live in Edirne. The new book will be full of memories, anecdotes and photos. If we don’t record our memories, they will all fade away, one by one. It will be a shame if we cannot leave behind a book for the next generations about the beautiful relationships and companionships in Edirne…

For our Edirne, you are truly a fortune. In the second book, we will continue to keep the reflections of rich Jewish culture of Edirne alive. We will preserve your memories. This book will also shed light on Edirne’s recent history. With this book, we will show the world how for hundreds of years we had lived with Jews like a big family, how we laughed and cried together.

We do need moral support for our book. You never know, maybe the interview videos may turn into a documentary, some day. All we ask is your support.