Light of Hanukkah Spread All Around Turkey

Hanukkah, the festival of lights, was celebrated with the hanukiyahs (menorahs) lit all around Turkey on the first night of the Hanukkah. Just like last year, Ortaköy Etz Ahayim Synagogue in Istanbul, connected live to 10 synagogues in Anatolia and 34 different locations in Istanbul, and let thousands of people experience the joy of Hanukkah, while revealing the vibrant and rich life of the Jewish community in Turkey.
Selin KANDİYOTİ
SHARE ON TWITTER SHARE ON FACEBOOK
December 2, 2021 539 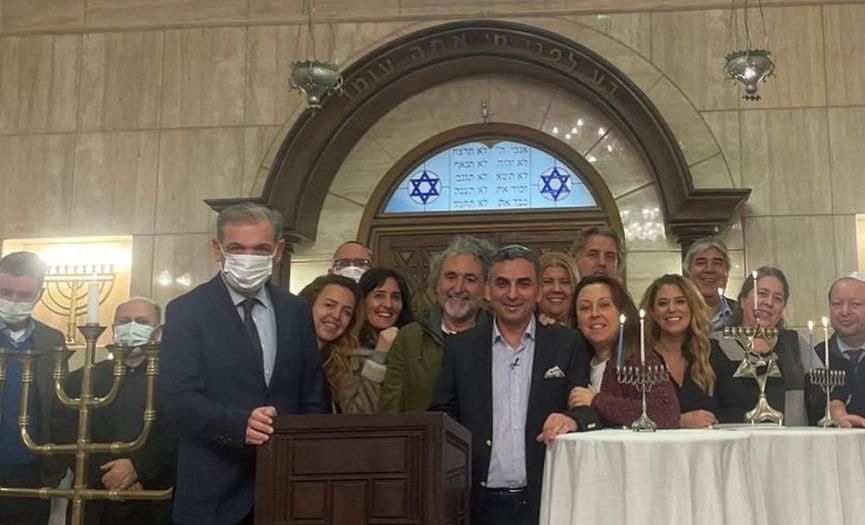 On the evening of Sunday, November 28th, the first night of Hanukkah, with Rabbi of Ortaköy Synagogue Rabbi Nafi Haleva's architecture and hosted by Ortaköy Etz Ahayim Synagogue, a Hanukkah celebration was organized via Zoom. As 1,300 people joined Zoom simultaneously, over 1,000 people also had the chance to watch the ceremony broadcasted live via Facebook. 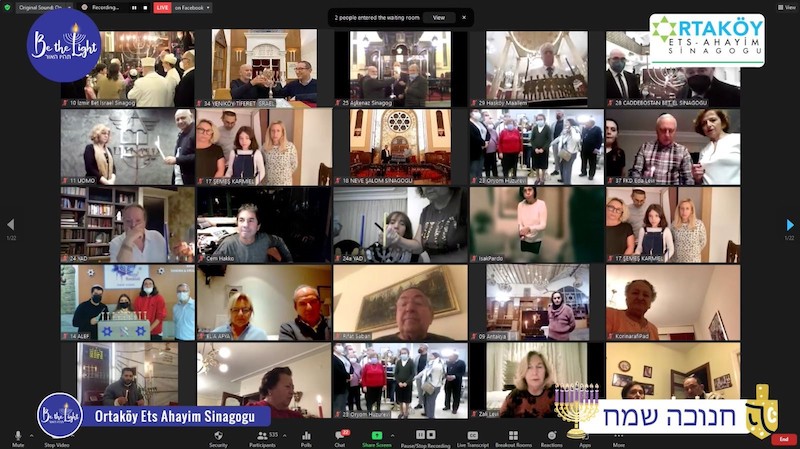 Rabbi Nafi Haleva and our Şalom Newspaper writer Selin Kandiyoti, who were presenting the ceremony, established live connections with 10 synagogues in Anatolia and 15 synagogues and 18 Jewish organizations. During the first half of the program video screenings along with the interesting facts about the synagogues spread throughout Anatolia were presented.

The first live connection was established from in front of the Gelibolu Synagogue of which only the walls have been left, joined by the Deputy Mayor of Gelibolu Mustafa Çoban, President of the Çanakkale Jewish Community Sami Kumru, Jewish citizens and people of Gelibolu. Serdar Azak, a citizen of Gelibolu, burst into tears while reading the letter that came from his Jewish friend, with whom they had been neighbors as children. Following the wishes of restoration for the Gelibolu Synagogue, live connections with other synagogues continued. Connections were established with the synagogues of Kirklareli, Gaziantep, Adana, Bursa, Edirne, Ankara, Çanakkale, Antakya, and Izmir respectively.

The speeches of Rıfat Haleva, who lives in Kirklareli, and Albert Mizrakli the 90-year-old son of Gaston Mizrahi, the founder of the synagogue in Adana, made all the participants emotional. In Edirne, Rıfat Mitrani connected live from the Edirne Synagogue, where he and his children had gotten married at. Recep Gürkan the Mayor of Edirne also expressed his feelings and congratulated the Hanukkah Festival of the Jewish people. Şaul Cenudioğlu the President of the Antakya Jewish Community talking about the attractions and beauties of their city, requested that everyone should visit Antakya.

The Izmir Jewish Community welcomed Chief Rabbi Isak Haleva in their synagogues for Hanukkah this year. Rabbi Nafi Haleva said, "We are conveying our prayers to all of you who are taking care of our synagogues and the Jewish heritage all around Anatolia with everything you've got. We are thankful to our state for making it possible for us to embrace this beauty." 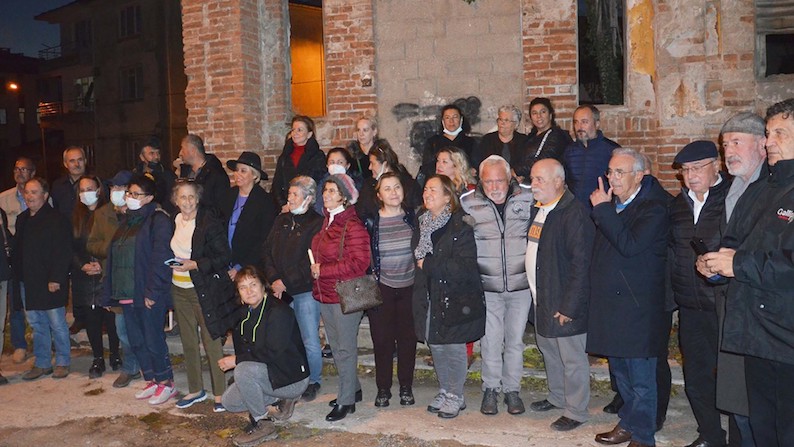 After the wishes and hopes of transferring the Jewish heritage in Anatolia to future generations have been expressed, the first live connection in Istanbul was made with Ulus Jewish Schools. Izzet Bana and the Estreyikas d'Estambol Choir, consisting of Minix Kindergarten children, with their song 'Ocho Kandelikas [meaning 'eight candles' in Ladino]' and dances they performed live, delighted the audience.

Following the broadcast of the surprise from the Ulus Jewish Schools, Ishak Ibrahimzadeh, the co-President of the Turkish Jewish Community joined the live broadcast from the Balikli Greek Hospital. President Ibrahimzadeh expressed his gratitude for the volunteers working with all their might to keep the Jewish community alive and emphasized that every moment lived was in fact a miracle.

Chief Rabbi Isak Haleva joining the broadcast once again from the Izmir Synagogue congratulated the Hanukkah festival of everyone stating, "I wish this beautiful image experienced from the Black Sea to the Aegean, from Marmara to the Mediterranean with its warm and beautiful waves, shall spread to all the world". Then Rabbi Nafi Haleva thanking all the participants said, "To unite is the beginning, maintaining unity is progress, working together is a success. We thank all our synagogues, associations, and institutions." 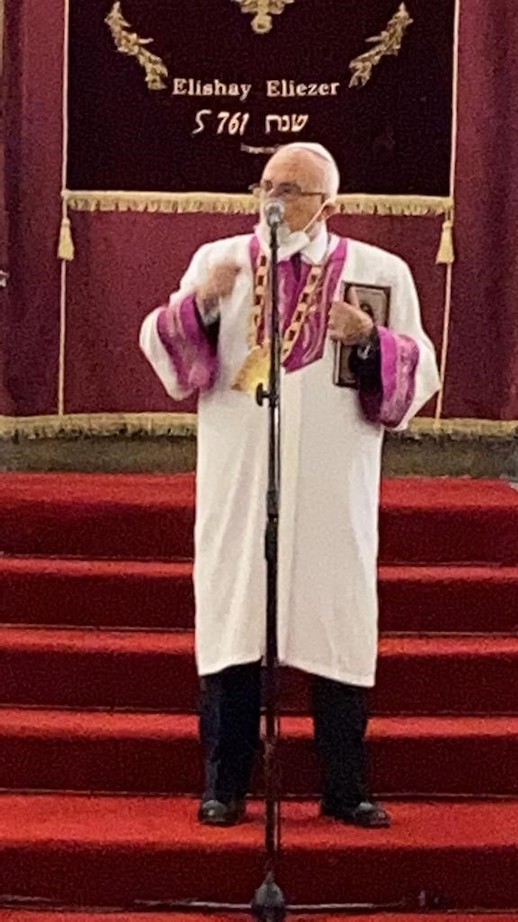 During the prayer and the lighting of the Hanukkah candles, the images of the audience were projected on the screen. At the end of the program, while lighting their Hanukiyahs at the same time altogether, the participants also found the chance to convey their holiday wishes to each other.

This organization has once again displayed how vibrant the Jewish community in Turkey is. The message of continuing this online event in the future, which has been realized for the second time since the beginning of the pandemic, even if the circumstances do not require it was also given.

Before the live broadcast of the ceremony had started, a compilation from the 2019 show of the dance group Shemesh Karmiel was presented. To watch the program which lasted approximately two hours, you may visit the link below: