First ´Kitchen Talks´ at ANU Museum was the Turkish Cuisine

The first of ´Kitchen talks´ where Jewish diasporas cuisines will be introduced by culinary researcher and journalist Roy Yerushalmi every month for a year at the ANU Museum (Museum of the Jewish People - Former Beit Hatfutsot) located in Tel Aviv University, with Foodish Organization, was organized on Friday, May 28th.
Elda SASUN
SHARE ON TWITTER SHARE ON FACEBOOK
June 3, 2021 510 In the first conversation on world cuisines, culinary researcher, food columnist, and journalist Roy Yerushalmi welcomed the famous Chef Avi Bitton. Roy Yerushalmi started the event with a speech on Turkish food and its influence on Israeli cuisine. Jews who had immigrated to Israel from various countries around the world brought together their food which was a part of their identity. The Turkish cuisine, which has a long history with Israel, also possesses many cultures in itself.

Chef Bitton, of Mersin descent from his mother's side, told Yerushalmi about his family cuisine and his profession. Bitton who had set his heart on the culinary business when he was young, said that besides the daily meals her mother had cooked to a very large family, her father of Moroccan origin had cooked the holiday meals, and shared his memories. Bitton stating that the sea was very influential in the cuisine of Mersin which is a very small and colorful harbor city in Turkey, he added, sometimes humorously and sometimes emotionally, even though he was running a professional chef kitchen today, he was missing her late mother's 'dolma's, okra, bulgur rice, patties of leek ('pırasa köftesi', a Sephardic food also known as 'albondigas de pırasa'). One of the pioneers of the Mediterranean and modern Israeli cuisine, Chef Bitton, after working as a chef at famous restaurants for years, is now offering his identity, with all its delicacies, that he had carried along with him from his home and mother to his customers, in the Café Popular that he is running and in the delicatessen shops in a few cities named Sulika after his father's grandmother. 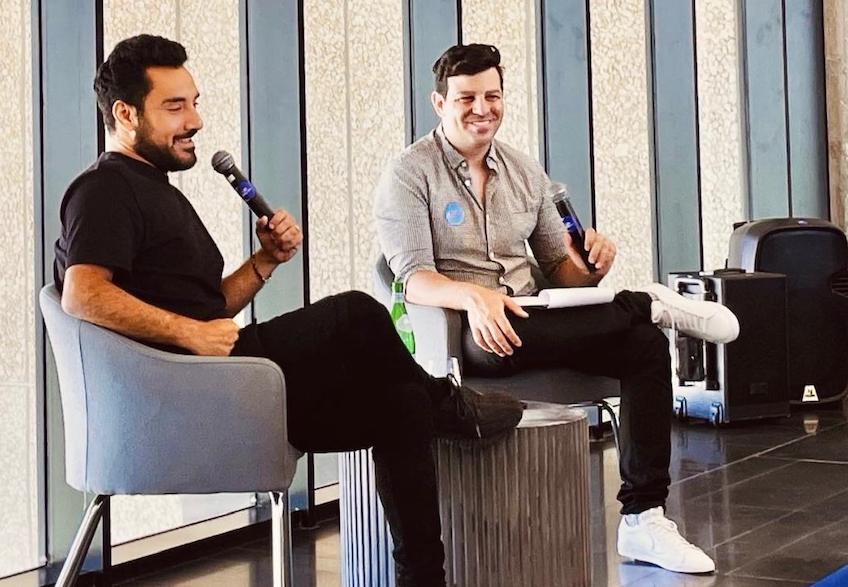 Roy Yerushalmi shared the excitement he had felt when during a visit to Spain, in a small cantina they had found open late at night, they saw and ate a potato dish 'patatikas kochas' which had been cooked frequently at their childhood home. He remarked that this dish is still named the same in Turkish Sephardic Jewish homes. Yerushalmi added, "There, that small incident, the fact that this dish had been cooked in my home and homes even 500 years ago, the remainder of an identity as old as this, was the factor that led me to research food cultures." The influence of Turkish cuisine on Israeli cuisine

Yerushalmi and Bitton then shared the influence of Turkish cuisine, growing richer every day, on Israeli cuisine. Yerushalmi, who is preparing his doctorate on food culture and history at the university, stated that the Turkish cuisine which had been only known for its 'borek' in the past, is now in many famous chefs' menus with its 'dolma' varieties, water borek (su boreği), patties of leek (pırasa köftesi), besides the Turkish custard that is almost a national dessert in Israel nowadays. Yerushalmi told that Turkish custard had been brought by the first Turkish Jews who had settled in Jaffa back in 1948, it used to be sold by the street vendors on the street, and that it had recently become very popular, and added that water borek also took its place in the local cuisine. At the end of the conversation, the guests, along with the wine presented, had the chance to taste yalanci dolma (Stuffed vine leaves with rice and herbs), cacik (an appetizer prepared with yogurt and cucumber), and the delicious 'pirasa köftesi'.